Ok, Freddy’s burgers are delicious, we all know this, but if you are someone who likes that sharp salty taste of blue cheese, this burger is made just for you! 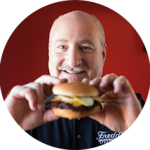 So what’s the secret to our flavorful Blue Cheese Bacon Steakburger? Well, it all starts with a great Freddy’s cooked-to-order steakburger, of course!

Sandwich the blue cheese crumbles, bacon and grilled onions between the piping hot steakburger patties for that melty, cheesy cravable burger you will have to have over and over again (but hurry, it won’t be around for long!).

So Is It Blue or Bleu Cheese?

The phrase “blue cheese” showed up in English a century and a half before the French “bleu cheese” version.

The earliest example of the phrase “blue cheese” in the Oxford English Dictionary is from an Aug. 3, 1787, entry in The Torrington Diaries. It wasn’t until the 20th century that “bleu cheese” showed up, according to Grammarphobia.com.

See What People Are Saying

Just remember, this seasonal favorite is only around for a short while at participating locations across the country.