Freddy Simon believed he was “the luckiest man in the world” but at Freddy’s, we believe we were just as lucky to have had him in our lives. We hope all of our #FredHeads will join us in celebrating his legacy from Feb 17 to 24 – see below for details! 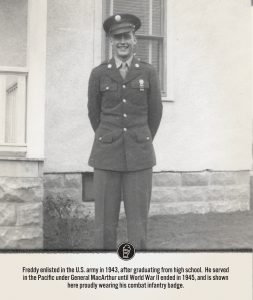 The youngest of nine children, Freddy grew up on a farm near Colwich, Kansas. He joined the U.S. Army infantry in 1943 and was assigned to the 1st Cavalry Division. While serving in the Pacific during World War II, Freddy earned the Purple Heart for injuries sustained, as well as a Bronze Star for valor and was awarded other ribbons and medals for his service to his country.

After being honorably discharged from duty, he returned home and attended Wichita University under the GI Bill, earning a degree in Accounting. In 1947, Freddy married Norma Jean Kerschen. Together they started a family and raised six children (five sons and one daughter). He spent 55 years with the same company in the hospitality industry. He was a friend and trusted business partner to restaurant owners and operators across the state. In his retirement, Freddy generously gave his time and resources to many military and charitable organizations.

Freddy was an avid hunter and sportsman, but his greatest joy was his family. Every family gathering and all other interactions in Freddy’s life provided him the opportunity to offer an encouraging word, share relatable stories of days gone by and give hugs.

Interested in learning more about Freddy and his life? Please visit our About Freddy page.

Co-founded in 2002 by brothers Bill and Randy Simon, and their friend and business partner, Scott Redler, the three men named the restaurant after Bill and Randy’s father, Freddy.

Today, Freddy’s has opened more than 400 restaurants from coast-to-coast and serves a menu reminiscent of the all-American meals Freddy prepared for his family.

Join Us in Celebrating Freddy

Additional bonus! Show us how you celebrate Freddy by tagging us on social media @freddysusa for a chance to be featured on our social media pages AND enter our contest to win 1 of 100 $50 gift cards. For all the details, please visit FreddysUSA.com/CelebrateFreddy.

Please check with your local Freddy’s for hours and COVID-19 safety measures.

*Not valid with any other offers. 95¢ cone or dish limited to one scoop of custard per dish or cake cone. Toppings and/or waffle cone available at additional cost. Offer valid from 2/17/21-2/24/21 at participating locations only. Not valid on delivery orders.