Who wants to go fishing at Freddy’s? Well, the hardest part of fishing is already done . . . now it’s time to eat! Come in and enjoy our premium wild-caught Alaska cod two ways: as a sandwich or as a fish & chips basket. Obviously, we will provide the malt vinegar, tangy tartar sauce or even better, Freddy’s Famous Fry Sauce® or Freddy’s Famous Jalapeño Fry Sauce® for dipping.

Our fish sandwich features our premium wild-caught Alaska cod – so flaky and delicious. Make it a meal with our crispy shoestring fries, or upgrade your side to our golden onion rings, gooey cheese curds or choose from our five other side options. 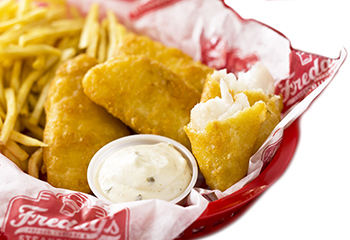 Are you more of a traditional fish & chips fan? We have that too!

Fun fact! Did you know fish & chips originated in London, England? Fish & chips is considered one of the early examples of culinary fusion.

Where does the fish for Freddy’s fish meals come from?

Alaska cod, is wild-caught in the Pacific Northwest.

Wild-caught Alaska cod has a mild flavor and is on the top 10 fish favorites list compiled by the National Oceanic and Atmospheric Administration.

Is Alaska cod a good source of protein?

Yes! A serving of Alaska cod is a great source of protein (very similar to Freddy’s chicken sandwiches).

Why are fries called “chips” in the fish & chips basket?

As we learned, fish & chips originated in England and the British Commonwealth English word for French fries is chips. Therefore, fish & chips were born and the term “chips” continues today. A few other words for yummy delicious fried potatoes are fries, frites, hot chips, potato wedges, and of course, the best of all Freddy’s shoestring fries!

Is fish & chips only a carry-out or take-away food?

Originally, fish & chips were created as a take-away food in the United Kingdom, but today it can be enjoyed anywhere. At Freddy’s, you are more than welcome to stay, take a seat and enjoy your Freddy’s fish & chips at your local Freddy’s or swing through and pick up your fish & chips to go. Either way, you will enjoy a great meal and Freddy’s friendly hospitality.

Just remember, this seasonal favorite is only around for a short while at participating locations across the country.