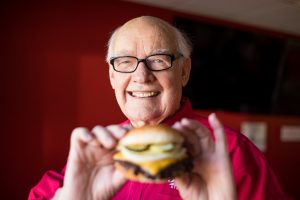 Birthday party, did someone say birthday party? Yes! Come celebrate Freddy’s birthday in 2020 with us at all Freddy’s Frozen Custard & Steakburger locations across the country. It’s a huge party!

Now, I know what some of you are thinking – Freddy’s birthday? I didn’t even know Freddy was a real person? Oh yes, he is a family-man who served his country in WWII – Freddy is not only a real man, he is a real hero.

Freddy grew up on a farm near Colwich, Kan., and signed up for the infantry in the U.S. Army at the first opportunity. After years of fighting in places around the Pacific Rim during World War II, Freddy earned the Purple Heart and the Bronze Star for his service and returned home safely. Following World War II, he worked hard for 56 years while raising his family. Freddy believes he is “the luckiest man in the world.”

Want to help us celebrate Freddy’s birthday (and maybe you’re feeling lucky too)?

For more information and the official rules and regulations, check out: FreddysUSA.com/birthday